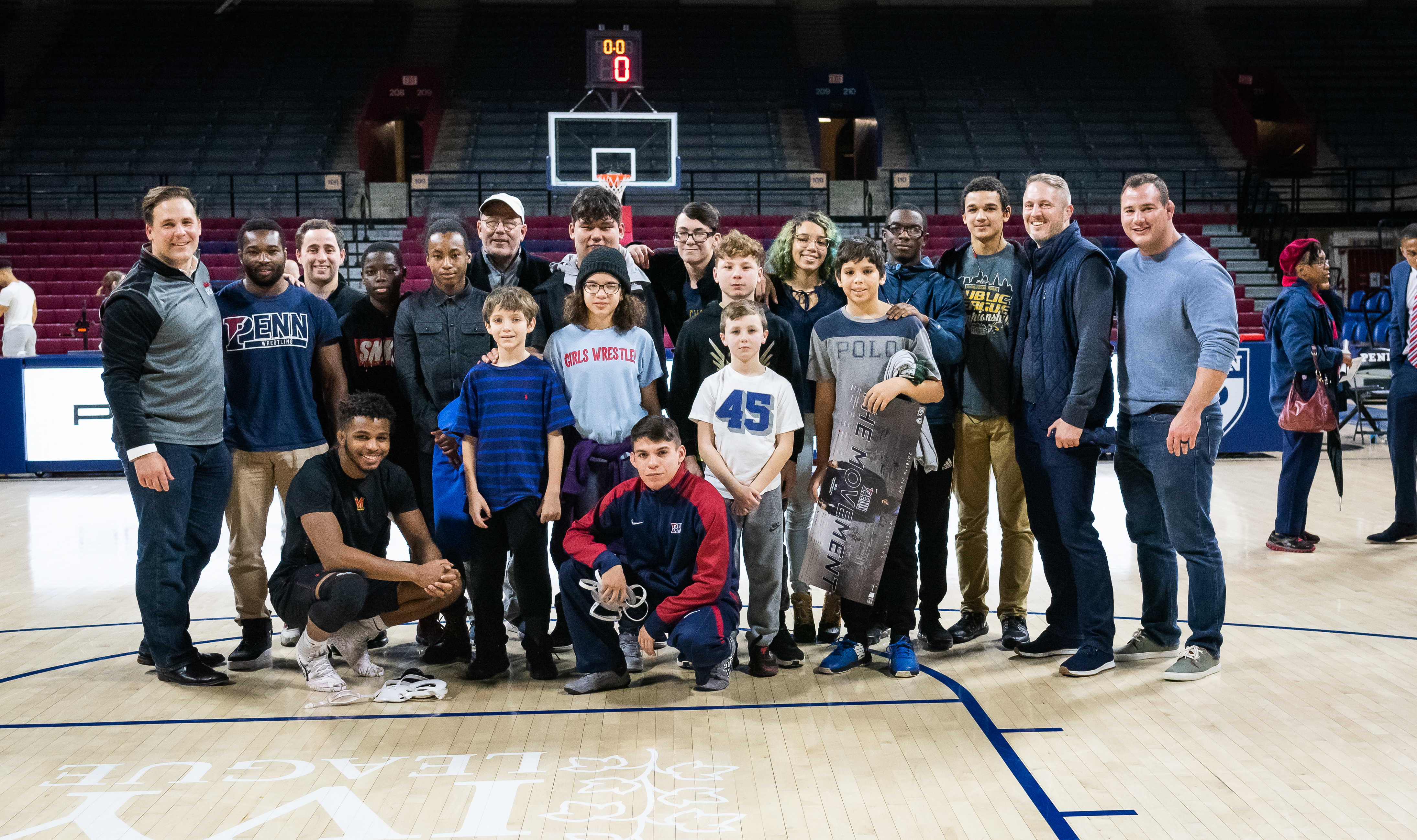 BTSP Student-Athletes Making History During Penn Wrestling’s long and storied history it has recorded many firsts; including crowning the first national champion, joining the first intercollegiate wrestling association as an inaugural member, and playing host to the first collegiate wrestling tournament. So, on Sunday December 2nd, as Penn hosted Maryland for a dual meet inside the historic Palestra it seemed only fitting that another historic moment took place. On Sunday, two young men in Jon Guevara (Penn) & Idris White (UMD) suited up on either side of the mat; both of whom learned to wrestle through the Beat the Streets Philadelphia (BTSP) program. Idris & Jon are both outstanding role models and fantastic examples of BTSP student-athletes continuing on a path of altered life trajectory. Like many BTSP student-athletes Idris White grew up in an under resourced, economically depressed section of Philadelphia. At the time, opportunities to participate in sports-based youth development programs were limited to more popular sports like football, basketball & baseball. Idris wasn’t particularly interested in those sports, however. In 2007, his father found a small wrestling program operating in the basement of a Police Athletic League recreation center in Port Richmond. At the time this was the only free wrestling club available in a city of nearly 1.5 million. Coincidentally, 2007 was also the year that the formation of BTSP began (we would later become officially established in 2009 and partnered with PAL shortly thereafter). As he tells it, Idris fell in love with the sport of wrestling almost immediately. Idris’ talent & passion for wrestling opened up scholarship opportunities for him to attend private high school at Father Judge. As a junior he finished 7th at the PIAA state championships, an accomplishment that garnered interest from a number of Division I wrestling coaches. For Jon Guevara, wrestling didn’t enter his life until his freshman year at Central High School. By that time, BTSP had grown to develop a partnership with the School District of Philadelphia; supporting all of the teams competing in the Philadelphia Public League. Despite Jon’s incredible work ethic and dedication to the sport, his season always ended at the NE Regional Tournament, one round shy of the State Championships. Jon’s goals were always bigger than wrestling. As a first-generation American, Jon was determined to be the first in his family to attend college; and not just any college. Jon was fully intent on attending the University of Pennsylvania. He took the initiative to enlist the help of mentors at Beat the Streets Philadelphia. Those mentors helped him with SAT/ACT test prep and helped him to navigate the college application process. In 2015, Jon received his acceptance letter from the University of Pennsylvania; that’s when he raised the bar even further and set his sights on becoming a Penn Wrestler. Last month, during the 2018 Keystone Classic, Jon recorded his first collegiate win in a Penn singlet! With Idris and Jon having different journeys, their paths rarely crossed in high school despite graduated from Philadelphia high schools in the same year. However, their common experience of being Beat the Streets wrestlers linked the two together as they made history being the first two BTSP wrestlers to suit up for opposing Division I wrestling teams. Idris and Jon represent the mission and goals of Beat the Streets Philly as their participation has positively altered life’s trajectory. Both young men have exemplified the BTSP core values of grit, compassion, service and team. Idris and Jon are pioneers and role models that current and future Beat the Streets program participants, proving that bold goals can be accomplished. When passion meets purpose the outcome is life altering! The Beat the Streets Wrestling Program of Philadelphia is committed to establishing youth wrestling programs in the Philadelphia metropolitan region. The organization fosters the holistic development of student-athletes by providing the resources to support wrestling and an academic mentoring programs throughout the greater Philadelphia region. Beat the Streets Philadelphia was founded on the principle that all children have the potential to become productive citizens when provided the proper support. This belief has endured since the establishment of our first program in 2008 located in the city of Camden, NJ. To this day, the organization remains laser focused on running wrestling and mentoring based youth development programs for underprivileged student-athletes that alter the trajectory of their lives.