Mentoring – From the Mat to the Classroom 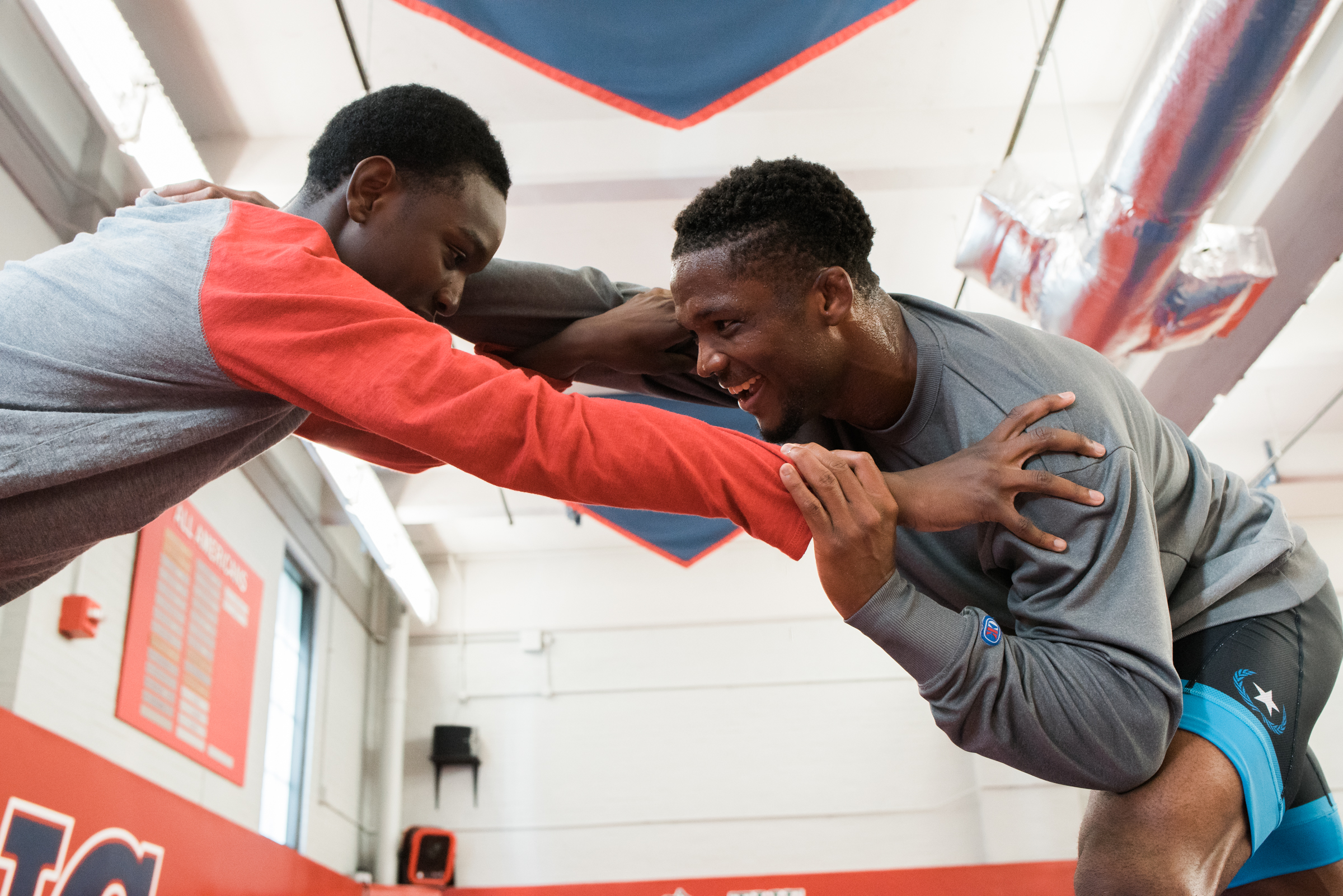 In July of 2016, B.J. Futrell moved to Philadelphia to continue his wrestling career with the Pennsylvania Regional Training Center. A qualifier for the 2016 Olympic Trials, Futrell had long been aware of Beat the Streets and admired the organizations work from afar. Last summer, shortly after settling into the city, B.J. sought out BTSP and expressed his interest in giving back to the sport that has given him so much. Beat the Streets was elated to have the help of a world-class athlete and immediately found a program that could use his leadership, Belmont Charter. After nearly a year of coaching, this past March, B.J. developed a bond with 8th grader Quion Harris. Quion had been a part of Belmont wrestling most of the time B.J. served as a coach, but it wasn't until a regional freestyle qualifier in the spring of 2017 that the two began to form a relationship. Quion was competing in a tournament and noticed shortly before getting on the mat that he was without a coach. Looking around quickly, he found a familiar face in B.J. and asked him to sit in his corner. From that point on, the two spend the better part of the day together and got to know each other. Ironically, it turned out that both Quion and B.J. had recently expressed an interest in getting involved with the Beat the Streets Mentoring Center. From the perspective of Beat the Streets mentoring staff, this was a perfect match. Often, the best mentoring relationships form naturally and when things work out that way we consider it a win! Entering the coming school year, the two plan to meet weekly at the Mentoring Center at 3700 Market Street. There, B.J. can help Quion with schoolwork, life, and goal setting. Quion is always excited to meet with B.J. and values their time in the mentoring center. We took some time last week to sit down with Quion and talk to him about this thoughts on Coach Futrell. When asked his thoughts here's what he had to say:

“I like that Coach Futrell always listens to me and cares about me. Talking everything out with coach helps me feel good about school, wrestling, and everything going on in my life.”

Their mentoring relationship is clearly paying off; Quion is dedicated in school and on the mat, and has developed admirable character. Coach Futrell had some  really nice things to say about who Quion is as a person:

“Quion is a joy to be around. I look forward to him walking through the doors before practice time. No matter what is going on he is always in good spirit and gives his best effort.” “Quion is very intelligent. He is a young man with a lot of wisdom and knows how to make good choices that will propel him in the classroom and on the wrestling mat. He is a very intentional listener and takes time to think before he responds. He is a good role model for his younger brother. Quion is a leader, not so much through words as he is a more quiet & soft spoken kid, but through his actions."

B.J. and Quion are a fantastic example of how mentoring relationships can bud organically. Sometimes, mentors don’t realize the true impact they have on student athletes; but at BTSP we see it everyday. Mentors aren't just a tutor or another adult to the students. Mentors are a role model, a coach, and a friend to the kids they work with and the lasting impact they have even in the smallest things is monumental. -- Beat the Streets Philadelphia works everyday to Positively Alter Life's Trajectory for thousands of kids like Quion throughout the Philadelphia area; but we can't do it alone. If you would like to contribute to our cause, please visit our donate now page to learn more about our ways to give. If you would like to donate your time as a mentor, feel free to visit our mentoring page or fill out a mentoring interest form.