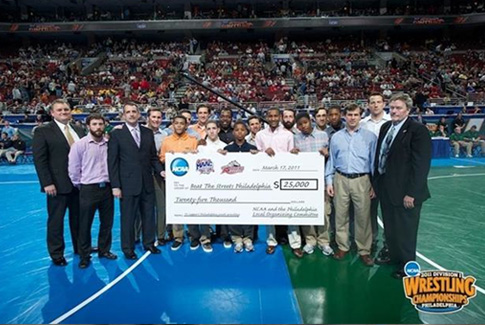 The NCAA Division I Wrestling Championships were held March 17-19, 2011 at the Wells Fargo Center in Philadelphia, PA.  Through this event, Beat the Streets Philadelphia was provided with many opportunities to expose our sponsored student-athletes to experiences that will undoubtedly create lifelong memories.  Not only did the NCAA, the MAAC, Rider University and the Local Organizing Committee give us the opportunity to include our young wrestlers in events during the championships, but they also made an extremely generous and meaningful donation to the organization.   The NCAA and the Local Organizing Committee donated $25,000 to support Beat the Streets Philadelphia.  We are extremely thankful and humbled by this contribution which will allow our organization to create many opportunities for hundreds of youth throughout the region. You can review the official NCAA News Release about the donation by going to the following link: NCAA Donation Press Release On Friday March 18, 2011 prior to the semi-finals the NCAA along with members of the Local Organizing Committee presented a check to student-athletes, coaches and staff of Beat the Streets Philadelphia.  It was a moment we will not soon forget as our athletes had the opportunity to walk onto the floor of the arena during this presentation where they received a warm reception from the crowd for their efforts.  Following the presentation, many of our athletes had the privilege of staying in the arena to watch wrestling on one of the greatest stages for our sport.  For many, this was their first time in a major sports arena and for all of our student-athletes, this was the first time they were able to witness the NCAA Wrestling Championships. Additionally, young wrestlers from Camden Youth Wrestling had the opportunity to lead the parade of All-Americans prior to the finals on Saturday March 19, 2011.  The young student-athletes were able to be on center stage as the All-Americans were applauded for their efforts to reach the podium and achieve life-long goals.  Bill Wallace, the founder of Camden Youth Wrestling as well as Rashaan Hornsby Jr., one of the original team members , were interviewed by the Philadelphia Inquirer about the experience and you can check out the video by going to the following link: Philadelphia Inquirer Interview with Camden Beat the Streets Philadelphia will continue to strive to support an environment for our young student-athletes that will encourage each and every one of them to set and achieve goals that were once unattainable. Beat the Streets Philadelphia is a registered 501(c)(3) non-profit organization that is supported primarily by generous donors.  Donations to the organization are tax-deductible and can be made by going to the link below: Donate Now