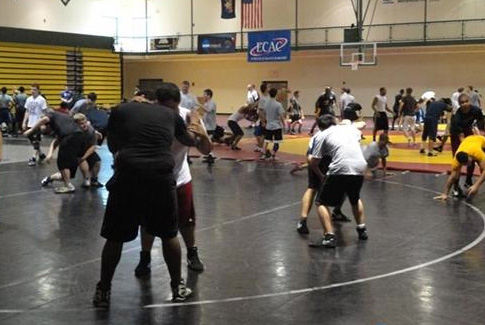 As the old wrestling saying goes, “Summer Wrestling Makes Winter Champions.”  From June 26 – 30, Beat The Streets Philadelphia (BTSP) wrestlers from area public schools attended wrestling camp in Scranton, Pennsylvania, putting the old adage into practice.  This was a chance for the kids to get out of the city and see the mountains and hills of northeast Pennsylvania.  BTSP Camper Enrique Hernandez recognized camp as a great opportunity to experience the culture outside of Philadelphia and to “get me off the streets.”  The camp was an important part of not only off season training, but also exposing BTSP wrestlers to new people, experiences, and cultures. The campers learned technique from wrestling greats Rob Eiter, Matt Valenti, and Brian Dolph, and also took part in team dual meets and a takedown tournament.  Our wrestlers were actively involved in demonstrations by the technicians, including Valenti’s lift and turk series, which the kids loved and picked up on well. BTSP campers attended practice and competition sessions three times a day, and some campers wrestled over 10 matches! Wrestlers Bernard Lipscomb from Frankford and Marius Kola from Northeast wrestled exceptionally well, as both went undefeated throughout the camp’s competitions. Our wrestlers were exposed to teams and wrestlers from all over parts of New Jersey and Pennsylvania. The coaches and counselors noticed our kids’ improvements in focus and perseverance over the course of the camp and were impressed with their effort and enthusiasm. Camp was a great experience and will have our wrestlers motivated to continue to train and look forward to the start of wrestling season in the fall.    BTSP was able to provide 88 scholarships for our high school student-athletes to attend camp as a result the generosity of our donors.  It is through this generosity that BTSP is able to support individuals and wrestling programs throughout inner city Philadelphia, Camden and Gloucester City in an effort to develop not only solid wrestlers, but more importantly well-adjusted and motivated individuals.  You can make a donation by going to: Donate Now Next up will be our Middle School campers attending one of two camps at the end of July and the beginning of August that are run by Beat the Streets NYC.  Stay tuned for more updates on Beat the Streets Philadelphia by checking out our website(www.btsphilly.org) or going to our facebook page(http://www.facebook.com/pages/Beat-The-Streets-Philadelphia/125158544187228).