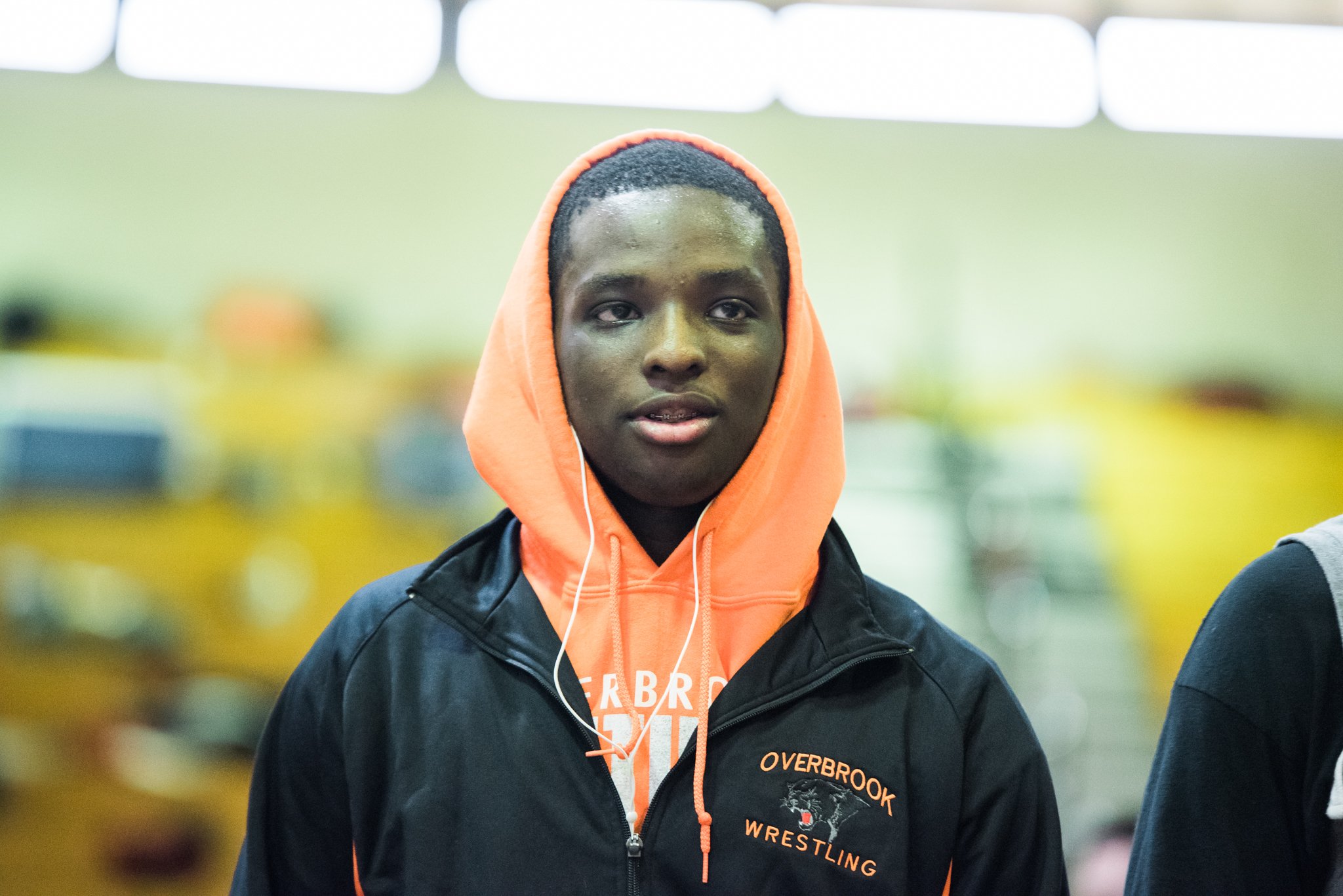 This article featuring our student-athletes will be updated over the next week, adding a couple of profiles each day. Stay tuned to learn more about the journeys of all 9 BTSP student-athletes who are qualified for the Fargo National Championships!
Daishawn Tilghman (Junior – 220)
Now a 3-time Fargo qualifier, Daishawn is ready to make the jump. In all 3 of his trips to the National Championships, he’s fallen just short of the podium to some very challenging opponents. This year, Daishawn is a proving to be a challenging opponent his competitors should not overlook.
After finishing 2nd in FS at NE Regionals, Daishawn is primed for a deep run.

Angel Garcia (US #18) (Junior – 170)
After unexpectedly coming home empty-handed last summer, Angel believes he has what it takes to earn double All-American status. Following two nice finals victories over National Preps 6th place finisher Caden Rogers (Malvern Prep), Angel is ready to buckle down, fine tune his technique, & get his mind right for July.
His path to the top of the podium will be far from easy, but that won’t deter Angel even in the slightest. Anyone stepping into the circle with Angel can look forward to a difficult, physical, six minutes.

Jameel Coles (Junior – 195)
After stepping away from freestyle/greco for a couple of years, Jameel is back & seems to have gotten the rust off nicely. Coles cruised a championship in freestyle & won the greco championships with a ‘flying squirrel’ in the waning seconds of the match!
After a 5th place finish at the PIAA State Tournament this past March & a 7th place finish at NHSCA Nationals, Jameel is rolling & feeling good about his chances heading into next month. Although his path that has included a few twists & turns over the past few years, we’re happy to see Jameel having fun wrestling & competing at a high level!

Tatyana Ortiz (Junior – 106)
In her final Fargo campaign, Taty is locked in & focused on her goal of climbing the Fargo podium. A senior, she’s the seasoned veteran of the group & continues to set the example for Philadelphia wrestlers following in her footsteps.
Next year, Tatyana is looking forward to competing as an inaugural member of the East Stroudsburg University Wrestling Team! We’re so proud of how far Tatyana has come over the years & elated to see her getting the opportunity to continue wrestling that she deserves!

Grigol Khochishivili (Junior – 152)
Gaga, as his teammates call him, began combat sports at a young age as a competitor in Judo. He’d found a great deal of success in the sport, finishing 3rd nationally just a few years ago.
Entering high school, wrestling seemed like a somewhat natural fit. While he has enjoyed folkstyle, he found a real passion for Greco-Roman wrestling last spring. He qualified for Fargo in greco-roman 2018, but was unable to attend due to family commitments. After a successful folkstyle season, winning a DXII Championship & falling just short of the PIAA State Tournament, Gaga is prepared to make some noise nationally.
Despite placing 2nd at states in both styles, Gaga has elected to focus on greco as he prepares for Fargo. His goal is not just to get on the podium, but to climb as high as he can!

John Colburne (Cadet – 182)
In just his 2nd year competing in freestyle/greco-roman wrestling, John is just scratching the surface of his potential. With big throws & a relentless attacking style, John powered his way to a 3rd place finish in freestyle & 2nd in greco. In addition to qualifying for the National Championships, John is also incredibly excited to have earned the opportunity to train at the Pennsylvania Regional Training Center!
John’s growth over the last year has not come by accident. His hard work, embrace of the grind, and emergence as a ‘student of the sport’ has really shined this spring. We have no doubt that John is going to impress at Fargo!

Steven Foster (Junior – 106)
Steven has taken the path less traveled by many wrestlers. After spending a majority of his youth competing in boxing, Steven began wrestling freestyle & greco just last spring with no real experience in folkstyle. Steven took to both olympic styles quite naturally in 2018 & qualified for Fargo despite his newness to the sport; a fantastic accomplishment!
This year, Steven is back & he has set the bar even higher. After finishing 2nd in freestyle & 1st in greco, with a full-year of wrestling experience under his belt, it’s going to be exciting to see how his Fargo campaign plays out.

Mohammed Savriddinov (Cadet – 132)
Mohammed “Mo” Savriddinov has been training out of Rizzo PAL this spring & it’s great to see his hard work pay off! A freshman at Council Rock South, Mo has been excited to continue improving all spring!
After a nice showing in freestyle, finishing 5th, Mo wrestled through a tough field on Sunday to finish 3rd in Greco-Roman. Our lone freshman qualifier, we’re very proud of Mo & excited for him to experience the Fargo for his first time!

Reynaldo Garcia (Cadet – 145)
After having his spring season cut short last year following a neck injury, Rey has been hungry to bounce back this spring! After great performances at NHSCA’s, Northeast Regionals, & Easton Freestyle Duals, Rey had some well-deserved confidence heading into the state tournament.
With confidence & high energy, Reynaldo dominated opponents on his way to a finals berth in both styles. While he ultimately fell short to a tough opponent in 2x PIAA State Medalist Paniro Johnson (Erie Cathedral Prep), Garcia walked away with a lot to build on over the course of the next few weeks. We’re very proud of the progress Rey has made & we’re elated to see him earn an opportunity that he’s worked so hard toward!
—
Providing truly unique experiences to student-athletes, like Fargo, takes a community effort. With the support of our community, we have a goal of raising $10,000; which would fully cover the cost of Fargo for the 9 qualified student-athletes. Beyond exposure to wrestling on a national stage, the Fargo experience provides kids an opportunity to build lasting relationships with wrestlers from all over the US, to train with world-level clinicians, and (for some) to leave the city of Philadelphia for the first time! For these kids who have worked so hard, we ask that you please help us provide a positively life-altering experience that each of them deserves!
Donations can be made through Facebook or through our website directly. If donating through our website, please write Fargo Fundraiser in the ‘comments’ section of the Donate Now page 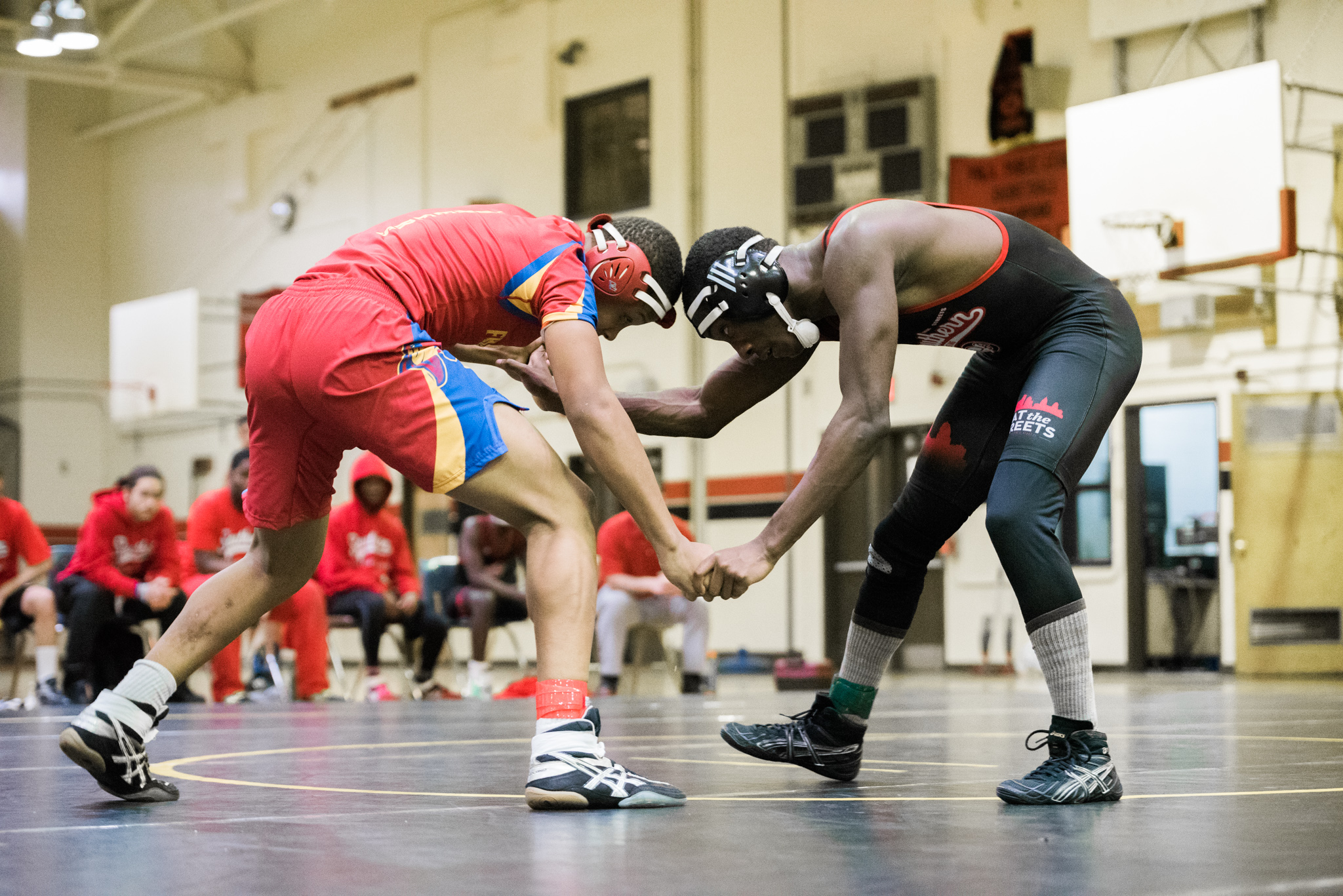 The PIAA District 12 is the home for all Philadelphia High School teams including both Catholic and Public schools. Within District 12, the Public League divides it’s 15 team into two Divisions; Independence and Liberty. Last month we featured the top performing teams from the Independence Division: a rematch of the 2016-2017 Public League Championship, Central bested Northeast by a score of 52-15. (See the match recap here)
This month we directed our attention towards the Liberty Division’s two undefeated teams, South Philadelphia and Frankford. With playoff implications on the line, this was sure to be a dual neither teams could afford to lose. Coaches Rob Schloss (Southern) and Joe Farina (Frankford) clearly understood the stakes. Both coaches could be seen carefully reviewing roster strategy as their teams warmed up. When we asked Coach Farina for a prediction he exclaimed “It’s going to be close!”. He couldn’t have been more right!
The match started out with a forfeit at the 113 weight class. With South’s Thaj Williams getting his hand raised in exchange for 6 team points momentum was already on Southern’s side. At 120 Damien Riles recorded a first period fall over Frankford’s Iverson Ratchford. Keyauri Pooler from Southern picked up another forfeit win for South at 126 moving his team to a 18-0 lead after three matches.


Frankford’s 132 pounder Luck Hives put a stop to the losing streak with a 26 second pin over Aristodue Intwali erasing the team score goose egg. But with the experience of South Philadelphia’s next two wrestlers the momentum would swing back in their direction. Dawud Faruqi (Southern) pinning Tariq Mines (Frankford), followed by a fall from Naseen Pennington (Southern) over Camont Mull (Frankford), Southern now had a commanding 30-6 lead nearing the mid point of the dual.

Forfeits at 152 and 160 from Southern started to play a role with Frankford’s Marcus Logan and Fateen McFadden getting 6 points each after effortless hand-raises. South Philadelphia’s Anthony Williamson would offset some of the forfeit sting by pinning Eric Watson (Frankford) in 1 minute and 12 seconds of the first period. Frankford would respond with back-to-back pins at 182 and 195 with Christ Adechokan beating Edgar Caraballo, and Gabriel Perez coming from behind to beat Steve Cacciatore.

After a forfeit for Southern’s Ishmael Kesserly at 220 the team score was 42-30. In anticipation of a forfeit win in favor of Frankford’s 106, Jorge Rivera, it was apparent that the match would come down to heavyweight. At 4 minutes and 10 Seconds in the third period it happened; Frankford’s Kenneth Purvis collects the fall against Marquise Millen! The final score 42-42!  The winner would be determined by criteria. To the official rule book… 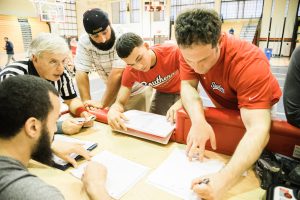 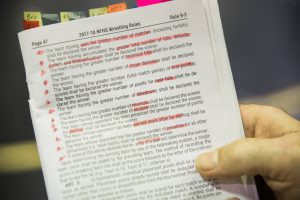 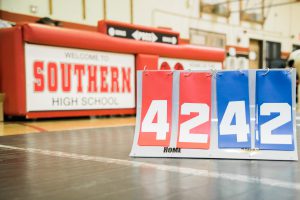