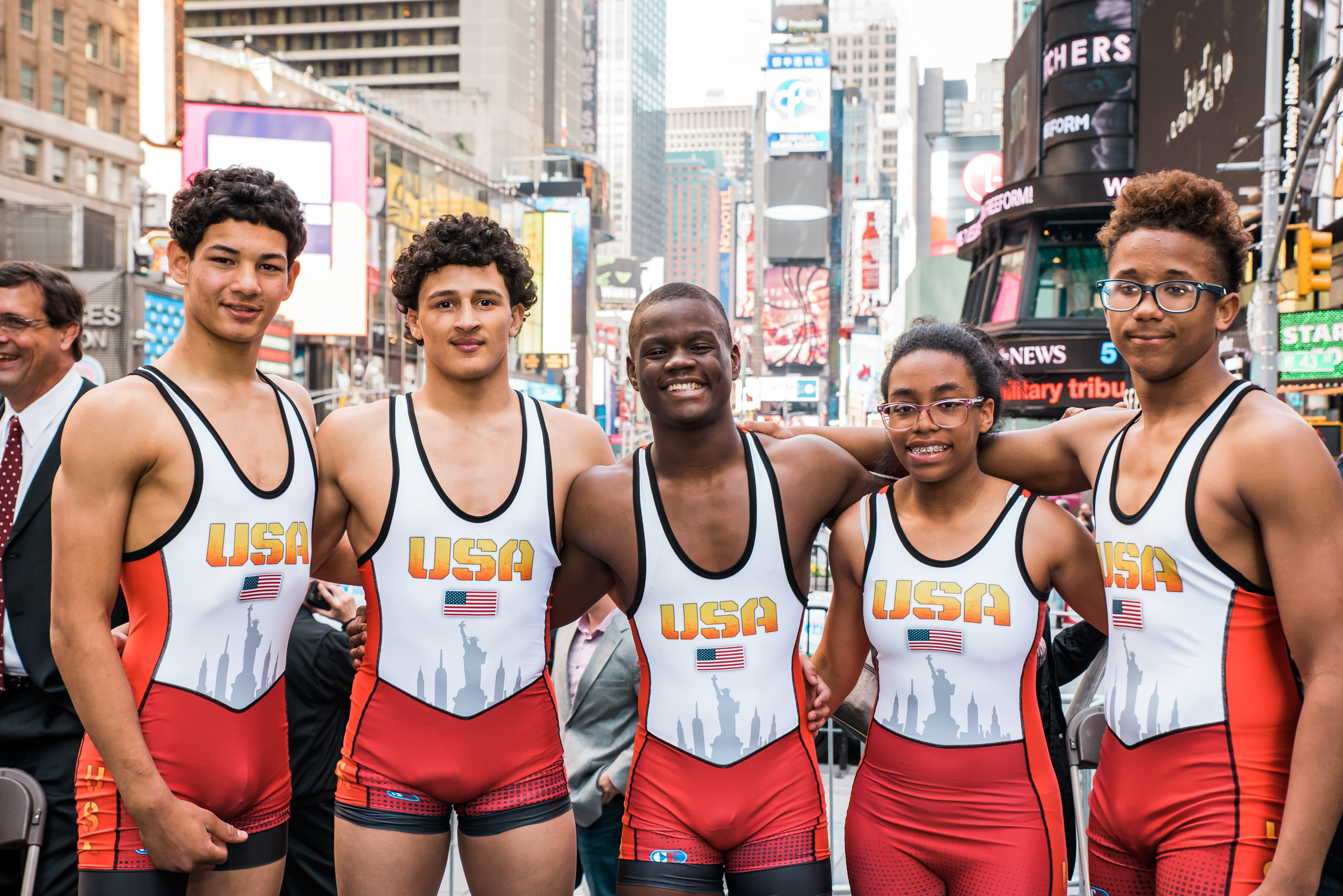 Beat the Streets Philadelphia had 5 wrestlers participate in the “United in the Square” exhibition held in Times Square this past Thursday, May 19th. The weather was perfect, and the air was thick with excitement as fans pressed together against the guard rails trying to get a glimpse of the outdoor action. The juxtaposition of the world’s oldest sport, against the hyper real, digital advertisement laden New York City backdrop was something to behold, as the matches were displayed to thousands, plastered across big screen televisions affixed to towering skyscrapers. Numerous passerby’s wandered into the event, curious to get a glimpse of the battling modern day gladiators, many of whom had never seen a wrestling match before in their lives. From a marketing perspective, the Beat the Streets event was a massive success garnering positive attention and interest to a frequently overlooked and underrepresented sport. The Beat the Streets wrestlers opened for the main event, Jr. and Sr. level matches featuring the US National Teams vs. International competition. The BTS Philly crew wrestled admirably, with Angel Garcia earning a first period pin over BTS-NY’s Joe Perez, and Edwin Morales picking up a 21-8 tech fall over BTS-NY’s Simon Chee. BTSP’s Ronald Palmer had an exciting bout with Prep National runner-up and Stanford commit, Jake Barry. Although he dropped a back and forth 14-11 decision, Ron hit arguably the slickest move of the evening, a beautiful cutback trip for 4 points that dropped jaws and earned a standing ovation from the spectators. Ernest Holland and Tiarra Andrews also represented BTSP, wrestling tough, but eventually losing their matches by fall. After getting off to a tough start, Greco World Bronze medalist, Andy Bisek, dropping a close 3-0 bout to former world champion Kim-Hyeon Woo of South Korea, team USA looked excellent. Returning Women’s World Champions Helen Maroulis and Adeline Gray won by pin and tech fall respectively against their Canadian opponents. Daton Fix, Mitch Mckee, and Mark Hall all were victorious in their matches against members of the Iranian Jr. National Team. While Zahid Valencia lost to returning Jr. World Champion, Mojtaba Goleij. The surprise of the night was newcomer to the international scene, J’Den Cox’s dominating 10-5 Sr. level victory over bona fide Iranian Stud, Meisam Mostafa Joukar. In the last match of the night, 4-time world champion and USA Wrestling poster boy, Jordan Burroughs took care of business and dismantled Pehman Yarahmadi, 11-2. Overall, the event was quite the spectacle, and the Beat the Street Philadelphia wrestlers gave their all and represented their programs, schools, and city with pride.